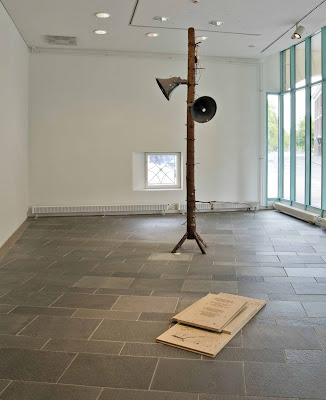 Tuomo Kangasmaa's Sound Installation "Remember Uuno Kailas"  presented at Oulu Museum of  Art 18 June 2016 – 8 January 2017. as a part of Hiukkavaaraaa -exhibition.
The Hiukkavaara garrison, located approximately six kilometres from Oulu city centre, has had many faces since 1957, when the non-commissioned officer school and the engineer company moved there. Since 1963, the garrison in the middle of the forest housed the entire Northern Brigade. The formerly closed area was given a new life in 1998, when facilities freshly vacated from conscript training turned into studios, rehearsal rooms, workshops and other spaces for dozens of artists, hundreds of bands and other users, and, as the latest arrival, asylum seekers, for whom emergency accommodation was provided in Hiukkavaara in autumn 2015. The former garrison is now one of the biggest centres of creative activity in Finland, and is set to become the heart of a new residential area.

The majority of the more than thirty visual artists who currently work in Hiukkavaara have their studios in the former K2 barracks, now known as the K2 House of Artists, while some have their studios in what was earlier known as barracks K3. The artists have been very satisfied with the affordable studios, the peaceful environment and the community spirit, testified by projects such as the Hiukkavaara Piknik festival and the K2 Unplugged studio exhibition arranged annually for several years now. Numerous events open to the general public have helped downtown and nearby residents discover the unique community.

The exhibition in the Oulu Museum of Art features 12 artists, who have been invited to present their latest works. The rich and versatile selection features paintings made using various techniques, sculptures, photographs, installations of diverse materials, video and media artworks, material collages and paper cut-outs.